Welcome to our Blog

The Story Behind the Judge Sears Room

When we first bought the house, we were in a hurry to get two guestrooms ready and the easiest two were the Presidents’ Room and the Maids’ Room.

But there was a third room, the Judge Sears Room, in its original form, then called the Sun Room—a large room with adjoining sun porch. Configuring a bathroom for this room was beyond the scope of what we could do at the time so, we assigned it to share a bathroom with the Maids’ Room—an acceptable arrangement in the early days of bed and breakfast in St. Louis.

A first glance, the room only needed its woodwork stripped, so the beautiful cherry wood underneath could once again be revealed, and its walls painted to eradicate the bubble gum pink forever. Plus something had to be done about the fireplace—well two things. Someone’s design style had clearly gone awry when they decided to glue metal 12”x12” tiles to the face of the fireplace and it refused to sit flush against the wall. 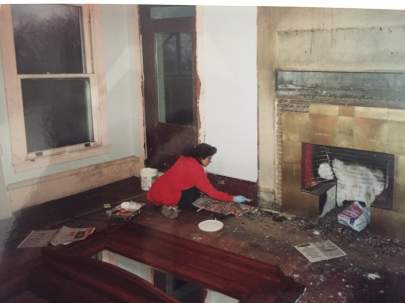 The tiles were tackled first. Prying them off proved a challenge. And not much of an improvement as the black epoxy glue used for the adhesive was adhered to the original gray brick face. Many hours and several units of elbow grease later, along with some magic chemicals triumphed over the black epoxy—the brick face was cleaned and only slightly worse for wear.

But that ill fitting fireplace mantle still confounded us. There was nothing else to do but remove it from the wall—a task we dreaded, not knowing how much damage might be done. We worried for nothing, turns out, as we discovered the ingenious method of the original installation. There were hooks of a sort embedded into the back of the mantle and they fit into “loops” embedded in the wall. It was as simple as lifting up and then out and the mantle was off—and no walls were destroyed in the process!

And the culprit behind the ill fitting mantle—literally—was a carpenters block plane behaving as a shim, preventing the mantle from sitting flush against the wall. The house had given us another souvenir.

With the mantle off, it was infinitely easier to refinish it, sitting on the floor. Once that was done, it was fit back into place, cherry wood refinished, brick face cleaned off and flush against the wall! The block plane was put in the cabinet of souvenirs located in the parlor.

Would you like more stories, more history, to see for yourself? Did you know we do tours of Lehmann House again? If you'd like more information, simply CLICK HERE